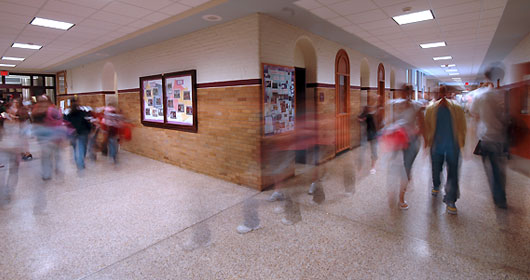 My mother always told me that I had to do well in school. She never showed me how, but it was drilled in my head for as long as I could write that I was supposed to be ‘smart’ and do well in school to uplift my family and my race.

Honestly, I never even liked school. I always felt like someone else in the classroom, save for when I was sharing or writing an essay, creating art performing a play. I felt stifled being forced to learn many difficult things that did not benefit my mood or my future. To top it all off, I was the ‘contaminated’ kid. Talk or befriend me and you were automatically a target in elementary school. I was a social outcast and although middle and high school wasn’t as bad as elementary school, I never regained my appreciation for school. I skipped a lot, and being in the academic environment gave me headaches. So, why am I even here?

In my junior year of high school I was convinced I was going to illustrate and create comic book characters. I had a low GPA at that time and I was going to spend all of my time drawing so I could be good enough to get out of school and never return. One day, my peers and I were having a conversation about college, perhaps brought about by our teacher and I listened to what they we’re saying. Everyone wanted money. No one really had a drive to learn; it was always a decision made for them before they could even speak. I didn’t want to go. The sedentary lifestyle wasn’t for me. I wanted to do and make… and that’s when I really learned what school was about. My mother, although pushing me to make a name for myself in school, never really explained how to get in to college or what exactly what was. She never explained to me the importance of a good work ethic in high school; she only said that it was something I had to maintain. I think my mother gave up on me a long time ago. I couldn’t blame her. But I did want to prove her wrong.  And I wanted to go to school- not to prove my mother wrong but simply because I found out that you had a choice to learn skills that you want to learn. I did not know it was possible before to learn so much in school. I thought college was only for the doctors, businessmen and women, lawyers and scientists of the world. It never dawned on me that I would be learning skills I wanted to learn and choosing a path that best fit me.

Even after my ‘groundbreaking’ discovery school did not get much easier for me, but I worked

hard. In my last two years of high school I had about a 3.8 average compared to my first two years leveling out to about 2.5. It felt good to prove everyone wrong, and I did. Then, I still had hopes of being an artist, but I’ve changed I will continue to and the great part is my education can change with me. Even know, I’m thinking of changing to a theater major and I know if I hadn’t continued my education and tried so hard I wouldn’t of had a chance to figure out what I want and what best suits me. Education is, to me, important not because I want to make anyone proud of me anymore, but because I’m learning about the things that make me happy and will mold me into a person that can give back to the world. Sometimes school isn’t for everyone but if there’s a better way to learn and grow among a community of lost intellectuals just like me, let me know. I still don’t appreciate carrying around books all the time and bad school food or spending hours reading boring texts, but I know I’m going to find my place here soon.

Jennifer Lee is a freshman at VCU currently studying Africana Studies and English. She grew up all around Virginia and enjoys trees, sunshine, driving, and good books. She hopes to become a writer, actress and an activist. She considers herself an average student but says she has an amazing brain and she hopes to empower those that are as lost as she is.